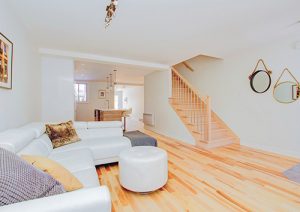 A prosperous industrial past
The Pointe-Saint-Charles neighbourhood has a fascinating history. The start of its development dates back to the beginning of the 19th century, with the building of several maritime canals, including the Lachine Canal. This last project, which allows the circumventing of the Lachine rapids, announces an even more ambitious one: the St. Lawrence Seaway, which will offer unmatched access to North American lands and the Great Lakes.

Consequently, between 1847 and 1945, the southwest Montreal landscape is made up of all types of industries drawn to the Lachine Canal’s power potential. Unsurprisingly, we see the building of workers’ apartments and houses, occupied primarily by English-speaking Irish immigrants. At this time, Francophones make up only 25% of the Pointe-Saint-Charles population.

The consequences of the economic crisis
The economic crisis of the 1930’s brings an important downturn in industrial activities, and the socio-economic consequences in the area are great. The closing of factories and the Lachine Canal puts many out of work and brings general poverty among the residents. The neighborhood quickly deteriorates, and an exodus of the population ensues. Indeed, between 1931 and 1991, the population goes from 30,000 to 13,000 people … a real demographic disaster!

Nevertheless, the residents of the neighbourhood do not lose hope. A deep sense of solidarity slowly emerges, which will bring about initiatives such as the first Quebec CLSC’s and a community legal clinic that will inspire the Quebec government to create a legal aid plan.

A healthy revitalization
The prosperity of this unique social economy will give Pointe-Saint-Charles the nickname of “irreducible village”. The resilience of the inhabitants and the numerous citizen initiatives will lead the neighborhood to a new golden age.

In the beginning of the 2000’s, families, young professionals, investors, and businessmen gradually move back to the banks of the Lachine Canal, reopened for recreational boating in 2002. Drawn by real estate potential, a thriving neighborhood, and accessibility to major highways, they are the pioneers of a new era of prosperity in Pointe-Saint-Charles. One visit will suffice for you to notice the extraordinary vitality of this historic district.